Listening is the key! 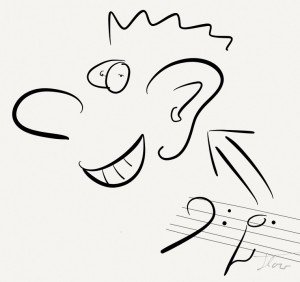 I discovered that a lot of students are facing the same problem when it comes to creativity/improvisation. Even if they’re no beginners, their technical skills are fine and they can play a certain bassline very well. But when they’re asked to play a fill or some variations, they don’t know how to do it. “I don’t know what to play.” is the most common answer.
I found two very helpful solutions: singing and listening!

The first thing, again (see my post Ear training for Beginners), is singing. I ask them to put away the instrument and start singing the bassline and then to slowly add some simple variations. Most students discover that they are much more musical than they believed to be. Often, there immediately come out lots of ideas. They just have to learn to trust themselves in their creativity and accept the little inventions they make and to “let go” when holding/playing the instrument.
I think that actually listening is the key. When they are playing their instrument, they’re too busy concentrating on their fingers and their technique, on the groove and on the right notes. But when they sing, they focus only on the music and they listen to themselves. They don’t think about notes and groove anymore. And that should also be the case while playing! Listen to what you’re doing and in order to get your focus away from the technique, sing along (or hum).

You can also take the listening part to a next level and let everything around you and also the notes you play inspire you. When I ask a student just to play something, they’re often going blank and don’t know what to do. As if they’ve forgotten why they’re here and as actually having an idea is almost shameful.
But it can be a funny game: just sit with your bass and listen to what’s going on around you… outside on the street… it can be anything. Then try to imitate the sounds, play along, play the opposite way. The humming of your hard drive for example: try to figure out the note. The car passing outside: be creative and play its horn or imitate its sound… Any possible rhythmical or percussive sound you hear: turn it into a rhythm and groove along. You see, there are hundreds of possibilities.
But that also counts for your own playing. Listen to your playing carefully and let every note you play inspire you to make some more music out of it.

I have some really nice tips, tricks and exercises for practicing exactly that: learning to play anything you want, to play whatever is in your head. You wanna know how?
Stay tuned…

PS: Of course you can also ask questions, leave comments or contact me directly. What’s your opinion on this subject?